Some Thoughts on Tax Reform

After several expeditious weeks of deliberation and negotiation, Congress officially passed the Tax Cuts and Jobs Act on Wednesday, December 20th to take effect the first day of 2018. The bill represents the most comprehensive and impactful piece of tax reform to be enacted since that of the Reagan Administration in 1986, and it has several key implications for individual taxpayers, investors, and corporations of all sizes. The following synopsis of the primary highlights of the tax bill are by no means exhaustive but are meant to inform you of the most significant takeaways to you as taxpayers and investors. We have not fully reviewed the tax bill document as it is in excess of 2,000 pages, but we have provided our initial thoughts below and will flesh this out further as we start to understand more deeply the topics at hand.

We encourage you to contact a tax professional to obtain more specific tax advice tailored to your individual situation and to reach out to your First Merchants Private Wealth Advisor for additional investment considerations.

Although the goal of tax simplification was only achieved to a limited extent, by and large the amendment should result in the reduction of marginal tax rates for the majority of American taxpayers. The table below from the Wall Street Journal¹ provides an overview of the adjustments made to the seven income tax brackets for both married and unmarried individuals. 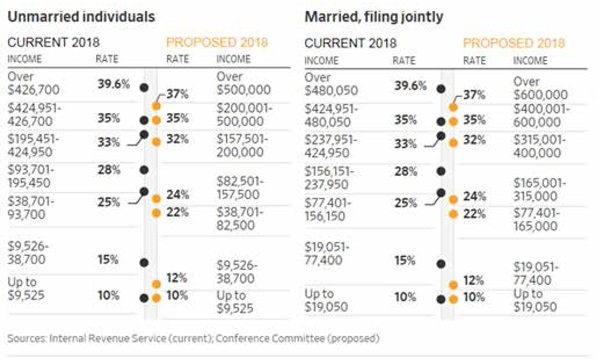 The only noted exception to the tax reductions would be for couples generating between $400,000 and $424,950 in income (singles generating between $200,000 and $424,950 in income) who will see their tax rates rise from 33% to 35%. It should also be noted that the tax bracket, like the majority of the new tax bill provisions, contains a sunset clause in which the brackets will reset to the previous 2017 levels (adjusted for inflation) at the end of the year 2025, unless extended by additional legislation.

In addition to the tax bracket adjustments, the other major reforms affecting individual taxpayers include the following: 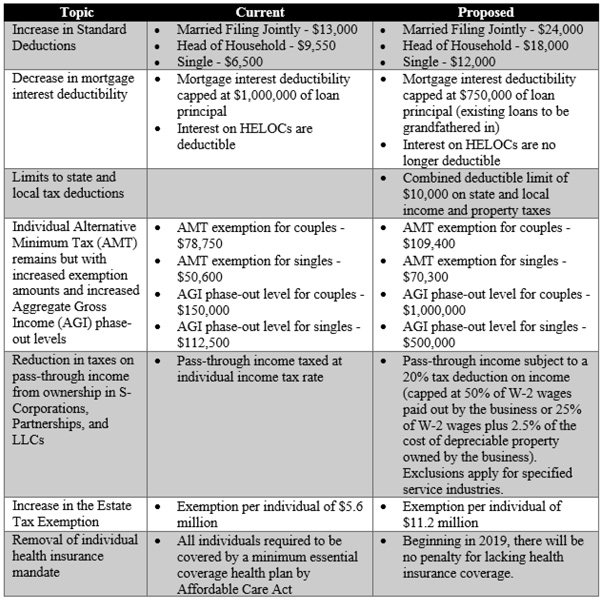 The most profound provision to corporations in the tax bill approved by congress is the decline in the corporate tax rate from 35% as it stands currently to just 21% beginning in 2018. The 21% tax rate would put the U.S. more in line with the average international corporate tax rate of about 22%, according to the Organization for Economic Cooperation and Development (OECD)³.

Furthermore, the 2017 Tax Cut and Jobs Act will permit 100% expensing of capital spending for businesses over the next 5 years, to be gradually phased out starting in the 6th year. The goal of this provision in combination with corporate tax rate cut is to encourage greater investment in capital spending and in research & development that would in turn generate greater GDP growth and corporate earnings. The tax revenue generated from greater corporate earnings would theoretically offset a portion of the fiscal deficit caused by the tax cuts.

The 2017 tax bill also includes provisions designed to encourage repatriation of overseas cash reserves held by large multi-national corporations. Most of the repatriated cash—which is primarily denominated in U.S. dollars and thus should have a limited effect on exchange rates—is largely expected to fund dividends and share buybacks in the coming years as companies will already have significant access to capital to fund further re-investment.

By and large, the majority of industries are expected to benefit from the amended tax plan with a few exceptions. However, several industries that are currently subject to higher effective tax rates, like retail, finance, and manufacturing sectors, may experience a higher relative boost to after-tax earnings than sectors like information technology and health care that have been able to attain much lower effective tax rates on average, particularly through international tax shelters. Small-cap stocks, which generally have higher effective tax rates than large-cap multi-national stocks, are also expected to experience a larger relative benefit. Additionally, capital intensive industries like manufacturing may receive greater benefit from the ability to completely expense capital spending. However, there are many factors at play resulting from the tax reforms including unforeseen consequences that may counter these insights.

Overall, the additional economic tailwinds, including increased consumer discretionary income and higher corporate earnings and investment, from the reduced corporate and individual tax burdens come at a time of an already strong economic outlook with stock markets surpassing all-time highs, growing consumer confidence, and declining unemployment levels. We expect strong market performance to continue into 2018 based on the improvements in both domestic and foreign economic fundamentals along with the domestic tax cuts. However, the bill does also contribute to growing inflationary pressures likely resulting in higher interest rates, and there may be unforeseen consequences of the tax reform bill.

Furthermore, it should be noted that the tax bill does come at the cost of an estimated additional national budget deficit of $1.5 trillion required to finance the cuts. Supporters believe that a significant portion of the deficit will be erased by the economic growth sparked by the reforms, but non-partisan analysis commissioned by congress predicted that it will likely not be able to cover the cost entirely4.

Regardless of the changing economic landscape and the new opportunities and challenges presented therein, the First Merchants Private Wealth team will continue to dig into and assess the potential impacts of tax reform, keeping our clients informed along the way. As always, we encourage you to reach out with any questions or requests for financial advice that you may have.