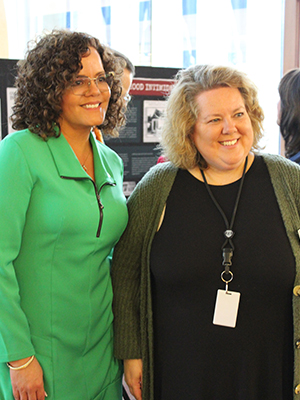 The best way to create a brighter future is to understand the past. That’s why First Merchants Bank is a proud sponsor of “Unwelcomed: A Fair Housing History of Sales & Lending Discrimination,” a new exhibit by the Fair Housing Center of Central Indiana (FHCCI), hosted at the Indianapolis Central Library. Jadira Hoptry, Director of Community Lending and Development with First Merchants, joined Indianapolis Mayor Joe Hogsett, Diane M. Shelly from the U.S. Department of Housing & Urban Development (HUD), and other dignitaries at the exhibit’s grand opening on April 11 and spoke about the important role banks play in repairing the harm discriminatory practices wrought.

“As I walked around, I tell you this is a very impactful exhibit,” Jadira said during her remarks. “Because we are visual people and seeing it here really brings it to reality. That’s what we need so we can continue moving the needle and making changes – because this is still happening.”

When Jadira looked at the exhibit, she also saw the faces of First Merchants clients. She spoke to a standing-room-only crowd about the difficulties one client, Sophie, had faced in her journey to homeownership.

“When we closed Sophie’s loan – a beautiful Black lady – she took the time to call me and tell me that, ‘This is history happening,’” Jadira recalled. “’Because now I can tell my kids and my grandkids that homeownership between us is possible – a reality that my parents were not able to accomplish. Despite having good jobs and good credit, they were told that they could not buy a home where they wanted to raise their kids. Today, you have helped this history change.’”

Jadira highlighted the many ways First Merchants works to ensure that others like Sophie can make their dreams of homeownership a reality. That includes programs like its Next Horizons Mortgage Program, Homebuyer Grants, and Down Payment Assistance. First Merchants has also worked to hire lenders who reflect the diverse communities they serve – particularly in the Community Home Lending and Community Business Lending space.

“And I’m pleased to say that this is working,” Jadira said. “As of last year, we have closed over 250 affordable housing loans in Indianapolis alone – over 40 percent of which assisted people of color and those in historically under- and un-banked communities.”

To her fellow bankers, Jadira had a few words of advice:

First Merchants is pleased to be a part of this exhibit and for Jadira to have been included in this impressive lineup of speakers for its opening:

You can visit “Unwelcomed: A Fair Housing History of Sales & Lending Discrimination” at the Indianapolis Central Library now through April 29. We encourage those in the area to visit and learn more about the history of fair housing. You can also view the exhibit online.

Learn more about the work the FHCCI is doing to increase access to fair housing. To learn more about how First Merchants is championing Fair Housing, explore our Next Horizons Mortgage Program.