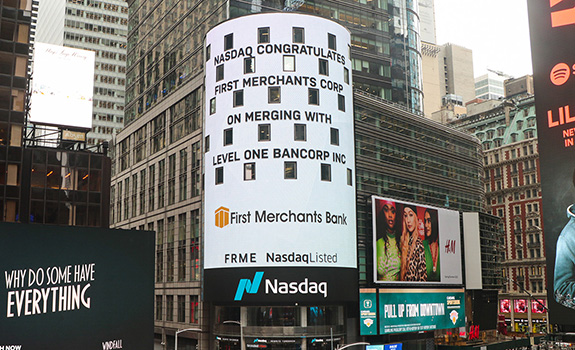 MUNCIE, Ind. – First Merchants Corporation (NASDAQ: FRME) and Level One Bancorp, LLC (NASDAQ: LEVL) have finalized a merger of the two companies. Following regulatory approvals last month, the companies consummated their legal closing through a cash/stock transaction effective April 1, 2022. As previously announced in late 2021, Level One Bank will also merge with and into First Merchants Bank.

Headquartered in Farmington Hills, Michigan, LEVL operated 17 banking center locations in the Michigan area, all of which will remain part of the First Merchants franchise. Since its founding in 2007, Level One Bank grew into one of the largest community banks in the state with total assets of $2.52 billion, total loans of $1.65 billion, and total deposits of $2.04 billion as of December 31, 2021.

“Like First Merchants, Level One achieved a solid reputation for a deep-rooted commitment to community banking, and we are excited they have chosen to become the newest member of the First Merchants family,” said First Merchants CEO, Mark Hardwick. “The LEVL franchise helps us to contiguously extend our presence in Michigan, leveraging the vision of First Merchants to enhance the financial wellness of the diverse communities we serve.”

“Our merger into First Merchants provides tremendous benefits to customers, shareholders and communities as we look forward to continuing the exceptional customer service, local responsiveness and strong community engagement that has defined Level One since its founding in 2007,” said Level One CEO, Patrick J. Fehring. “First Merchants is the perfect partner to continue our legacy of service excellence.”

First Merchants will have assets of approximately $18 billion and will remain the second largest financial holding company headquartered in Indiana. The combined company, doing business as First Merchants Bank, will complete its integration during the third quarter of 2022.

The company will have 126 banking offices across Indiana, Michigan, Ohio and Illinois.

These forward-looking statements are subject to significant risks, assumptions and uncertainties that may cause results to differ materially from those set forth in forward-looking statements, including, among other things: First Merchants’ ability to achieve the expected cost savings, synergies and other anticipated benefits from the merger transaction; possible changes in monetary and fiscal policies, and laws and regulations; the effects of easing restrictions on participants in the financial services industry; the cost and other effects of legal and administrative cases; possible changes in the credit worthiness of customers and the possible impairment of collectability of loans; fluctuations in market rates of interest; competitive factors in the banking industry; changes in the banking legislation or regulatory requirements of federal and state agencies applicable to bank holding companies and banks like First Merchants’ affiliate bank; continued availability of earnings and excess capital sufficient for the lawful and prudent declaration of dividends; changes in market, economic, operational, liquidity, credit and interest rate risks associated with the First Merchants’ business; and other risks and factors identified in each of First Merchants’ filings with the Securities and Exchange Commission. First Merchants does not undertake any obligation to update any forward-looking statement, whether written or oral, relating to the matters discussed in this press release. In addition, First Merchants’ past results of operations do not necessarily indicate its anticipated future results.