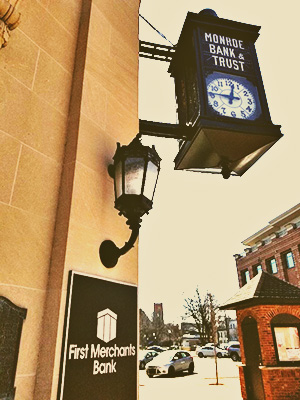 MONROE, Mich. – For more than 125 years, First Merchants has demonstrated its commitment to bettering the communities it serves. The company continues that commitment and today announced it will oversee and fund the restoration of a rare antique clock in downtown Monroe.

The iconic McClintock-Loomis clock, measuring 9 ft. tall and 3 ft. wide, is located on the exterior of First Merchants’ downtown banking center and was first displayed in 1917 by Monroe State Savings Bank. First Merchants is contracting with The Public Clock, an Indiana-based company specializing in antique clock restoration, and has approved funding for the full restoration project.
Julian Broggio, a member of the First Merchants corporate marketing department, has worked in downtown Monroe for more than five years. He says the project reinforces the company’s priority to build strong communities, giving back and improving the quality of life for individuals and families.
“First Merchants has always been a community-focused bank, with roots in community banking. We’re proud to restore and preserve a piece of iconic Monroe history with national significance,” said Broggio. “Banking is modernizing at a rapid pace, and we don’t want to leave important historical items by the wayside. History matters. Our communities matter. As much as we evolve banking and innovate with technology to make it easier for clients to manage their finances, one thing that will never change is the core of our business. People, relationships and community.”
“Clients have told us how much they value this clock and other iconic examples of Monroe’s rich heritage,” said Tom Myers, First Merchants regional president for the Michigan market. “We’re proud to contribute time, energy and resources in supporting our neighbors.”
The McClintock-Loomis clock features a unique, patented design. It is made of bronze with copper hoods at the top and bottom. Government buildings, schools and others displayed similar clocks during the early part of the 20th century, helping residents and visitors know the correct time of day. Few examples remain across the country.
The O.B. McClintock Company, originally known as the McClintock-Loomis Company, started making clocks in 1908 and continued until 1950. First Merchants has assets of approximately $14.1 billion with 130 banking offices in Indiana, Michigan, Ohio and Illinois.
###
About First Merchants Corporation
First Merchants Corporation is a financial holding company headquartered in Muncie, Indiana. The Corporation has one full-service bank charter, First Merchants Bank. The Bank also operates as First Merchants Private Wealth Advisors (as a division of First Merchants Bank). First Merchants Corporation’s common stock is traded on the NASDAQ Global Select Market System under the symbol FRME. Quotations are carried in daily newspapers and can be found on the company’s website ( www.firstmerchants.com). FIRST MERCHANTS and the Shield Logo are federally registered trademarks of First Merchants Corporation.
close
External Link Disclaimer