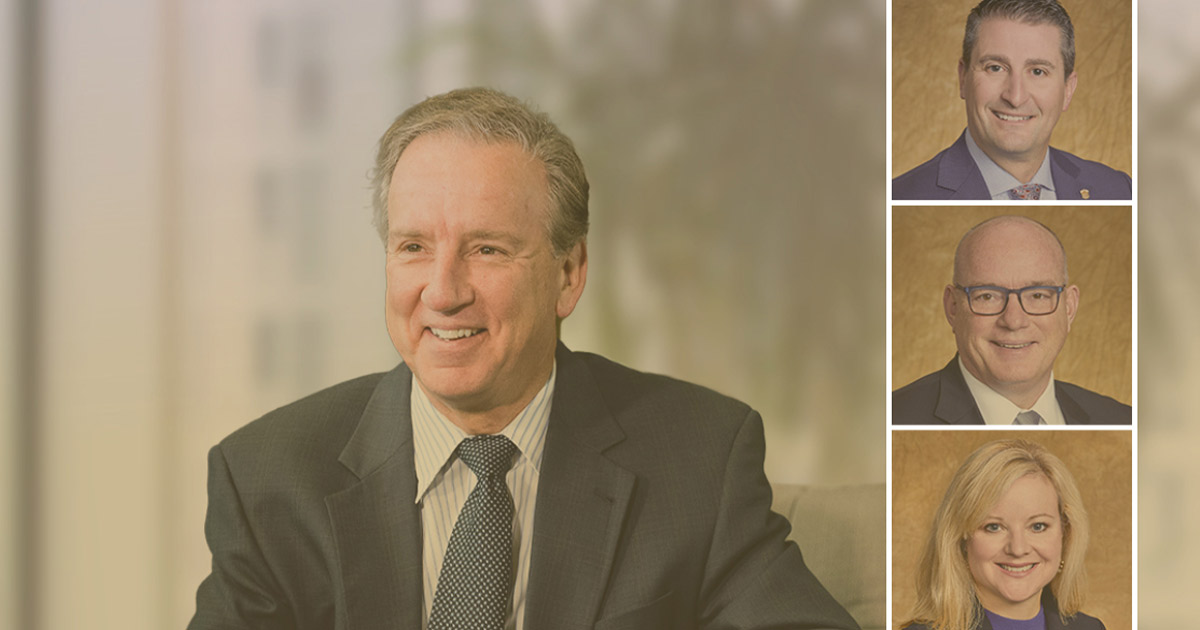 MUNCIE, Ind. – After more than 13 years of leading significant growth and success for First Merchants, President & CEO Michael C. Rechin announced today he will retire from his position effective December 31, 2020. Rechin will remain on the First Merchants Board of Directors and will serve as an advisor to First Merchants going forward.
Charles Schalliol, Chairman of the Board of Directors, stated, “Mike’s retirement caps an outstanding period in which he led First Merchants Corporation to unprecedented growth and success. On Mike’s watch, First Merchants grew from $3 billion in assets to $13 billion, with income growth to match. Forbes has recognized and ranked First Merchants as one of the five best banks in the country in each of the last three years.”
Succeeding Rechin will be Mark Hardwick, current COO and CFO, who will become CEO, and Michael Stewart, current Chief Banking Officer, who will become President. Michele Kawiecki, current Senior Vice President of Finance, will become CFO.  All leadership changes will be effective January 1, 2021.
“It has been a great privilege to lead First Merchants Corporation,” said Rechin. “The management team we’ve developed is well prepared to take First Merchants to the next level as Mark, Mike and Michele have all earned their next leadership responsibilities. My wife Debbie and I consider Indiana home. We plan to stay for the foreseeable future, and I will continue to assist the new leadership team.”
Mark Hardwick joined First Merchants in November 1997 as corporate controller and was promoted to CFO in April of 2002. In June of 2007, Hardwick assumed all leadership duties related to operations, technology and risk management for the corporation. In 2016, his title expanded to include COO, broadening his responsibilities to oversight of internal audits, facilities and corporate social responsibility.
“This is a tremendous opportunity, and I want to thank Mike Rechin and the Board of Directors for believing in my ability to lead First Merchants,” said Hardwick. “I plan to continue building on the foundation Mike laid and prepare First Merchants to enhance the digital banking experience and community connectivity. Mike Stewart and I are aligned on taking First Merchants to the next level.”
Mike Stewart joined First Merchants in 2008 and leads revenue generating activities in his current role. Prior to First Merchants, Stewart served in executive roles with National City Bank in Indiana.
“I look forward to working closely with Mark and the Board to continue First Merchants’ positive trajectory,” said Stewart.  “First Merchants has experienced tremendous growth during the past decade, and we will continue that model. Over the course of my 32-year banking career, I have had the privilege to work for Mike for 23 of those. We have enjoyed a strong partnership and perspective of First Merchants growth that I intend to continue with our First Merchants teammates. Our success stems from the success of our clients and communities, and we will maintain our focus on exceptional service.”
Michele Kawiecki joined First Merchants in 2015 having previously served as Senior Vice President of Capital Management and Assistant Treasurer at UMB Financial Corporation in Kansas City, Missouri.
“I’ve had the pleasure of working closely with our leadership team during the past several years,” said Kawiecki. “We are completely aligned with our goals and strategies moving forward, and I very much look forward to beginning my new role.”
Schalliol added, “All three announced promotions are part of a long planned succession process by Mike Rechin and the Board of Directors. The Board believes strongly that these management changes will position First Merchants well to continue to be a leading regional bank. We thank Mike Rechin for his tenure of superb leadership.”
###
About First Merchants Corporation
First Merchants Corporation is a financial holding company headquartered in Muncie, Indiana. The Corporation has one full-service bank charter, First Merchants Bank. The Bank also operates as First Merchants Private Wealth Advisors (as a division of First Merchants Bank). First Merchants Corporation’s common stock is traded on the NASDAQ Global Select Market System under the symbol FRME. Quotations are carried in daily newspapers and can be found on the company’s website (www.firstmerchants.com). FIRST MERCHANTS and the Shield Logo are federally registered trademarks of First Merchants Corporation.
External Link Disclaimer