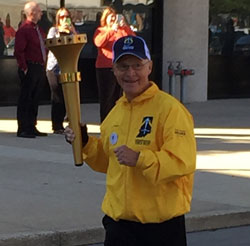 First Merchants employees, friends and colleagues lined the street dressed in black, gold and white to cheer on Mr. Anderson. The group held balloons and wore custom buttons in honor of Mr. Anderson and in support of our community and the Indiana Bicentennial. Mr. Anderson was selected as one of 24 local Delaware County Torchbearers in the Indiana Bicentennial Torch Relay. Torchbearers were nominated by the public and nominations were vetted at the local level by county torch relay coordinating committees.